On the surface it may look like just another dual-port blow-off valve, but the Respons is actually much more than that.

Out of Stock. Dispatches in 3 - 4 Business Days

On the surface it may look like just another dual-port blow-off valve, but the Respons is actually much more than that. Featuring GFB’s patented venting bias adjustment system, the Respons allows you to precisely control how much air vents from each of the two outlets.

Why is this so important? Two key reasons:

Hold on, it gets better. The Respons isn’t just a noise-maker. It also;

For example, using GFB’s TMS (Turbo Management System) principle, tests show that the Respons can return the engine to peak boost up to 30% faster than a factory diverter valve when shifting gears (more information below)

(*Chart shows comparative manifold boost pressure rise during 1st to 2nd gear shift as tested on a CA18DET with a T28 turbo. GFB TMS improvement is seen as a 30% faster return to peak boost, during which time up to 40% more boost is available) 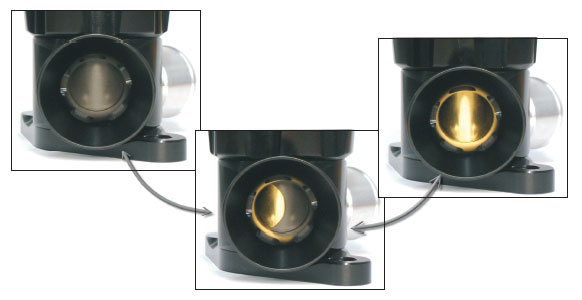 Twisting the adjusting ring opens up the atmo port, whilst the recirc port is simultaneously closed.This results in possible venting ratios ranging from 100% recirc, right through to 100% atmosphere and anywhere in between.

When we say “bolt-on”, that’s EXACTLY what we mean. Everything you need is included, it fits directly in the factory location (not on a separate adaptor), and no modifications to the car are required.

Performance AND sound without compromise!

Get the inside information…

GFB is no stranger to dual port BOVs. In fact, GFB pioneered the design in 1999, following up with the patented venting bias adjustment system in 2001.

This technology is not just a gimmick – it’s the key to getting a blow-off sound without the issues (unlike other valves), and is exclusive to GFB.

“I thought venting to atmosphere couldn’t be done on a car with an airflow meter, so how does the Respons do it?”

We’ve all heard the stories and seen people get shot down on forums when they ask about BOVs. Common responses are “your car will stall,backfire, run rich, go slower, or rip a hole in the space-time continuum that will bring about the end of the universe”. Certainly, if the BOV is not designed or adjusted correctly, at least some of these may be true.When you vent a BOV to atmosphere, you’re letting air out of the system that has been measured by the airflow meter, so the ECU will continue to inject fuel for that missing air, hence the issues with over-fuelling that can occur.

However, by controlling HOW MUCH the valve vents, WHEN it vents, and for HOW LONG, the Respons can be configured to vent a portion of air to atmosphere at a time and of a volume that least affects the fuelling to the point where there are no negative side-effects.

Since our competitors do not have a means for adjusting the amount of air that is vented to atmosphere, they are unable to achieve the same success that a Respons does on even the most sensitive engines.

If everything you’ve heard tells you a BOV won’t work on your car, try a GFB Respons – you will be surprised!

“How does a GFB Respons improve performance?”

Unlike factory bypass valves, or other brand valves that require different springs for different boost levels, a GFB valve CANNOT be forced open by high boost!

The balanced piston design in a GFB valve uses boost pressure on either side to cancel out the forces. Therefore it doesn’t matter how much boost you run, you can be sure a Respons valve will deliver all of it to the engine.

GFB’s TMS (Turbo Management System) principle is based on an operating method that is different to all factory bypass valves, which can be summarised as:

This difference in operating methods means that the GFB valve only vents when required, and only enough air to prevent compressor surge.

For example, during a gearshift it is possible to preserve a small amount of boost pressure for a short duration. Then, when the throttle is then re-opened, peak boost is reached faster than if all pressure is lost (as is the case with the factory valve that remains fully open too long).

There are no reviews yet.

This vehicle fitment list has been provided as a guideline only. Please check the product description for exact vehicle compatibility.

About Us
Tutorials
Products
Under The Hood